One of the unique aspects of the MARS project is its world-class instrumentation, which provides high-quality measurements for research and diagnostics.

The instrumentation of the MARS project has two components:

The URNS Platform (Underwater Radiated Noise Signatures) consists of four vertical arrays of three hydrophones forming two gates; these are separated by 8 km and moored between the two shipping lanes of the St. Lawrence off Rimouski. The geometry of the arrays makes it possible to implement measurements in accordance with the ANSI/ASA S12/64-2009 standard. Its position in the centre of the two shipping lanes allows the acoustic signatures of the candidate ships to be measured without diverting them. The presence of two gates permits signature measurements of two configurations of ship operations from a single passage. The antennae are autonomous and communicate their data in real time. They can operate from April to November. In addition to recording the ship's signatures, they continuously acquire ambient noise created by all traffic and cetacean emissions to provide a complete picture of the acoustic context of the St. Lawrence Estuary.

The OBAVSI Equipment (On-Board Acoustics and Vibratory Source identification) consists of a set of tachometers, microphones, and accelerometers deployed in strategic locations on the ship to characterize the noise of machinery and cavitation. A first part of the network is dedicated to machinery noise, with the aim of identifying internal sources and paths of transmission from the sources to outside the ship. A second part of the network is dedicated to the detection of cavitation from a grid of tight accelerometers near the propeller. Measurements are stored automatically for monitoring, which can last up to one month; this ensures a quality diagnosis over a wide range of operating conditions. Data can be transmitted to shore and synchronized with those of the URNS platform to enable identification of the internal sources causing underwater radiated noise and to propose reduction methods. 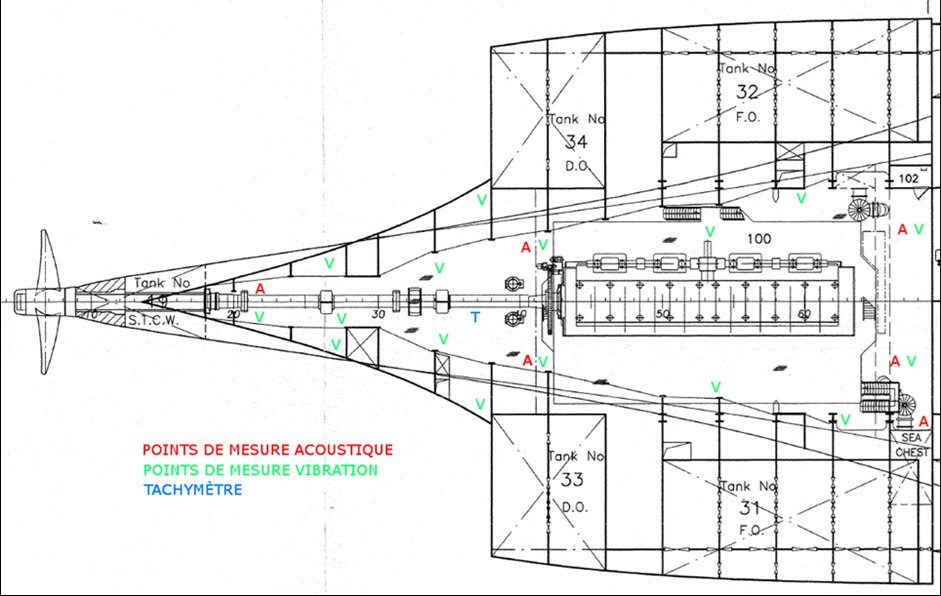